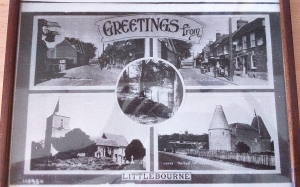 A brief history of Littlebourne

Over thousands of years Littlebourne has had successive visitors and settlers starting in palaeolithic times when hunter gatherers first crossed the land bridge which connected England to the continent, down to the present day.  The flint tools made by these early visitors can be found all along the Little Stour valley. The gravel deposits along the valley were laid down as the estuaries gradually silted up leaving the rivers as we know them today. Bronze Age barrows illustrate continued occupation and enclosed Iron Age farmstead sites with typical round houses have been found and excavated. A Roman road passes through the village to Wenderton and Richborough. In the 1930s traces of a Roman Villa were found in Church Meadow.

The settlers who made the greatest impression on the countryside and also gave us our present place names were the Jutes. Their Law of Gavelkind led to the fragmentation of land holdings and the pattern of small outlying farms with arable, pasture and woodland. The names Swanton, Higham. Elbridge, Woolton, Stour , Bourne are all of Jutish derivation. A Jutish king, Withred, gave 5 ploughlands called Littlebourne to St Augustine,s Abbey in 690 and it stayed with the Church through many vicissitudes (including the Norman Invasion) for most of the time until 1922. The Vikings were also visitors using the rivers to access further inland. A Viking shield was found in the bank at SwantonOriginally the Manor was overseen by a steward monk, in the early 1300s this was a man called Solomon of Ripple. He re-built all the buildings of the Manor including the Church and Barn. At this time there was a tile kiln in Pine Wood. The church mentioned in the Domesday Book would have been a wooden one.

The next immigrants were the Hugenots or Flemings many of whom came to Kent after the massacre of St Bartholomew,s Eve. 1572. They were skilled artists and craftsmen-silversmiths, weavers, brick makers, tanners and leather workers. They left their mark in the brick buildings still surviving especially the flemish gables as on The Anchor, Cottages on the Green, Higham, and the Old Vicarage. They also established the Tannery on the Green which moved to Canterbury in the 1890s when Montague Kingsford of Littlebourne House bought it and turned it into a farm. For many years the Denne family were tenants of the Manor and lived in Littlebourne Court. This came to an end in the early 1800s when Henry Denne built Elbridge House and moved there to pursue his shooting The lease was passed to first the Pembrokes and then the Mounts who bought the Manor in 1922. The river has always been important and industries grew up along its banks ---Milling, Tanning, Basketmaking. It was also famous for the quality of its trout even in Tudor times.

In the early 1800s the course of the river was altered and until recently the old course still marked the boundary between Littlebourne and Ickham.. The roads were also altered in Nargate St, at the top of Evenhill and at Leeses Bend. Some old roads still survive as footpaths.The soil is fertile the chalk giving way to 'black pebble beds' ideal for top fruit so after the manor was sold it changed  from producing cereals and hops to apple and pear orchards. Unfortunately these have now been grubbed out. Pine Wood is a remnant of an Ancient Woodland called Abbot's Wood. In the 1960s 50% of it was grubbed out to plant a pear orchard now also gone. During the Second World War Littlebourne was in the centre of the Battle of Britain and the Doodlebugs. Since then it has changed from a predominantly agricultural village to an increasingly dormitory village but is lucky to have Local Housing, Church, Chapel, Post Office and Community Store, together with a well used Hall and Recreation Ground.