The Parish church of Littlebourne is dedicated to Saint Vincent of Saragossa, Deacon and Martyr, Patron of Vine Dressers.  There are only six churches in England dedicated to St Vincent and this is the only one in the Diocese of Canterbury.

There is mention of a Church in Littlebourne in the Domesday Book in 1086; probably originally built in wood by the monks of St Augustine’s who kept vines in the Parish. Inspection of the Barn framework shows some evidence of re-use of major timbers and these may well have originally formed part of the first Church.

The mix of architectural styles are indicative of a long period of construction. For example, the South Nave arcading probably belongs to the 12th whilst the height of the Chancel would indicate construction in the 13th century. The window styles, ranging from the lancets in the Chancel to the more ornate double lights in the Aisles, reflect similar passage of time.

The plan of the Church comprises a central Nave with lateral aisles to North and South, a Chancel to the East and Bell Tower to the West. 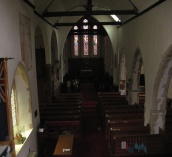 The Nave was constructed c 1200 with the two aisles dating originally from the same time. The North Aisle, originally the same length as the South, collapsed at the end of the 18th century possibly in a heavy snow storm that also damaged the steeple. From the exterior one of the original North arcade arches can be seen enclosing a window that was presumably previously in the original external wall. Internally the original arcade was replaced in timber and the two semi-circular arches created whilst the whole was given a flat roof.

The Wall Painting on the North wall of the Nave, facing the South West door was discovered when repairs were being carried out after the North Aisle collapse. Although now faded, it was sketched by Charles Igglesden and published in one of his books in 1900. In it he says that it is thought to represent a scene from the life of St Christopher. Tradition has it that there was a chapel to St Christopher in one of the aisles and that travellers stopped to offer a prayer for safe passage over the Stour at Grove (8 kilometers north of here). In 1514 William Davison gave 1 kg of wax to light tapers to St Christopher.

The Chancel is higher than the Nave and this may indicate that it was rebuilt in the 13th century. The remaining lancet windows would tend to confirm this date. In the North Wall of the Sanctuary and above the window cill moulding is an Aumbry, used for the reserved sacrament. This was noted by the incumbent Thomas Browne in the early years of the 15th century.

Opposite on the South Wall is a double piscina found behind plaster in the late 19th century.

On the South side of the Chancel Arch there is a small archway that probably gave access to a Rood Loft on which hung the Light of the Holy Cross. This is mentioned in various wills between 1482 and 1533.

In the South Aisle there is another piscina to the right of the altar. This part of the Aisle is traditionally the Lady Chapel which is mentioned in wills of 1499, 1514 and 1516. On some of the pillars small crosses can be seen cut into the stonework, traditionally believed to be the work of returning crusaders and pilgrims.

St Vincent’s has an exceptionally fine collection of stained glass windows designed by Nathaniel Westlake and executed by his company, Lavers, Barraud & Westlake. They were designed and installed between 1864 and 1895. It is unusual to find such a comprehensive glazing scheme designed and executed by the same firm and showing a variety of historically inspired styles to such good effect.

The earliest window is the triple lancet at the East end and the last the McGachen Memorial window in the South Aisle. 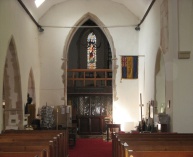 Built at the same time as the Nave, the large Tower Arch allows the ringing chamber (and ringers) to be in full view of the congregation.

Before 1899 there were five bells. The oldest (5th) was cast by Robert Mot of Whitechapel in 1597, and the 4th in 1610 by Joseph Hatch of Ulcombe. The Tenor bell is a comparative rarity, being cast during the Commonwealth by William Hatch of Ulcombe in 1650. The 2nd and 3rd bells were cast in Canterbury in 1639 and 1540 respectively, but both were recast by Charles Carr of Smethwick in 1899 and joined by a new treble also from Carr in the same year to celebrate the Diamond Jubilee. At the same time the bells were rehung in a new timber and cast iron frame by Carr. In 1930 the firm of Mot placed all the bells on ball bearings. The total weight of the peal is approx 2.1 tonnes.

The Porch, replacing a former dilapidated one, was dedicated in July 1896 to the memory of Ellen Mary McGachen daughter of the Vicar. It was designed by Fry and Gardener of Dover to harmonise with the rest of the building.

The Font, similarly dedicated to the memory of Ellen Mary McGachen replaces an earlier one which was removed by Nicholas Stredwick in 1645 under order of Parliament.

The Picture on the South Wall was given in memory of Montague Kingsford and his wife who, in the 19th century, lived for many years at Littlebourne House and were of the extensive family of millers and solicitors of that name.

The Clock, situated in the Bell Tower, is dated 1855 with the name E.S.Hardeman, Canterbury, but some details suggest a Derby firm. It is still wound by hand.

The Pieta is the work of the distinguished sculptor Edward Bainbridge Copnall who lived at Lee Priory, Littlebourne, and who was a Past Prseident of the Royal Society of British Sculptors. It was given by his wife and was dedicated on 18th October 1974, exactly one year after his death.